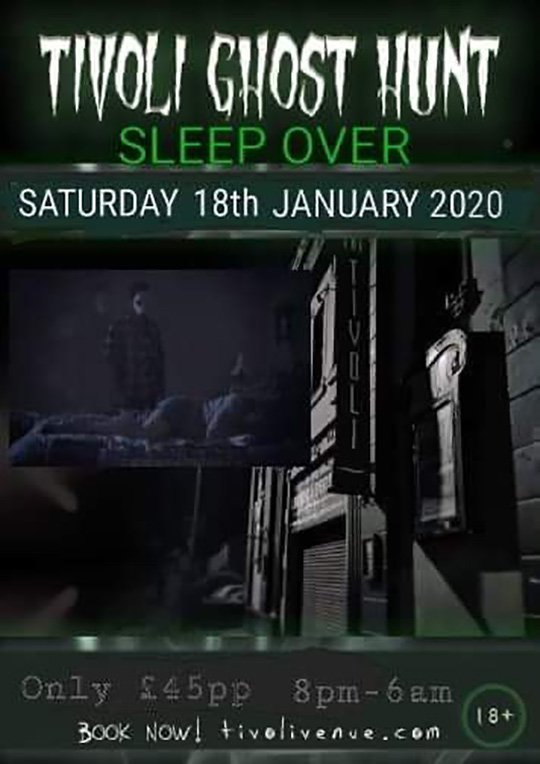 Are you brave enough to encounter the haunted past of the Tivoli? Are you capable of venturing outside of your comfort zone? Will you challenge your friends to step into the dark unknown… AND sleep with the spirits???

Investigate the whole building… see the parts people don’t even know exist… Take part in experiments known to communicate with the spirits… then after all that… see if you can sleep!

Bring your camera and see what you can capture… bring your sleeping bag, wrap up warm, and bring a torch!

Doors open 8pm through til 6am… 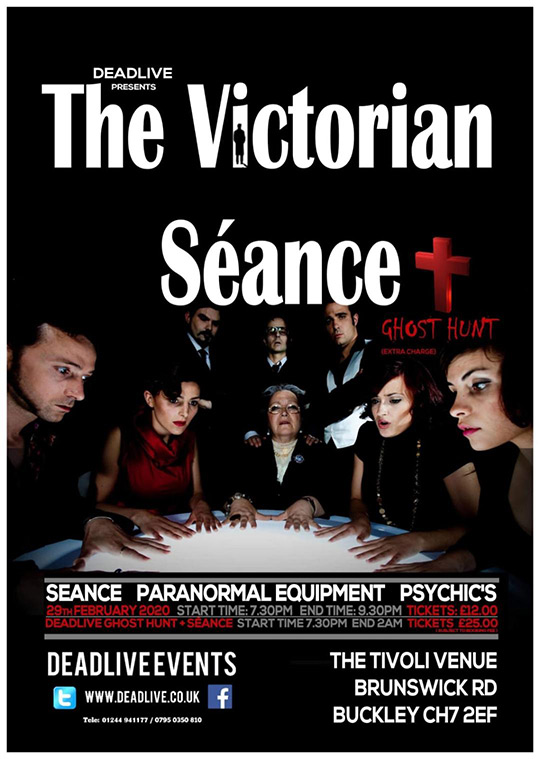 You have watched it on TV and seen it in the movies, now it is your chance to experience the Victoria Séance. Let the trumpets play and the ectoplasm flow as you become the mediums for this very special experience. With glass divination dowsing table tipping and the Trans box you will make the connection on this exclusive event with DeadLive. Psychics & Mediums

As part of the Séance our a spiritual mediums will work with you to connect with the spirit world. On the event you may like to bring an object so the medium may hold this to use to connect with the spirit world. This is called Psychometry, this ability in which a person can sense or “read” the history of an object by touching it. Such a person can receive impressions from an object by holding it in his/her hands or, perhaps, touching it to the forehead. Dowsing and Crystals Experiment Copper and crystals have proved to be the key to the spirit world on our investigations, you now have the chance to feel the energy of this key as we open the vortex door to the spirit world. Electronic Voice Phenomena. During the Seance we will be introducing some modern gadgets with one that allegedly records or talks with spirit energy. Electronic Voice Phenomena. (EVP) are sounds found on electronic recordings which resemble speech, but are reportedly not the result of intentional recording or rendering. We will be using recording devices and experts on the subject of EVP and you will be the investigator asking the questions. Over the years a number of people have heard screams and groans in buildings some have even had conversations with alleged ghosts and phantom’s using these devices.

The Ghost Hunt (Extra Cost). Be prepared to explore one of North Wales’ very own haunted buildings. Experience the now legendary paranormal world that many have talked about but have never had the chance to witness yet! You have been given this unique opportunity to visit What Lies within this Most Haunted Building in this town. Be prepared to be shocked as your senses are opened in the Paranormal world of Tivoli Hauntings 1-2-1 Readings can take place after an event at an extra cost.

As the story goes…

The Tivoli is located in the small town of Buckley in North East Wales.

The original Central Hall was built in 1880 and was used to show ‘the new’ silent films as well as being home to a host of travelling showmen. The hall was demolished in 1920 and, in 1925; the Tivoli Theatre (Buckley Picture House Ltd) was built on the same site – an extension of almost half a century of amazing history.

The current venue has undergone a number of transformations over the past 90 years, but despite all its makeovers the old cinema (or as we call it ‘The Theatre of Dreams’) is still untouched, retaining all its original early 20th Century features, even after the fatal fire in the mid-1940s. Interestingly, much of the damage caused by the fire has not been repaired, giving parts of the building an intimidating appearance and an often unnervingly chilling atmosphere.

The Tivoli has hosted many bands over the years, including the legendary Black Sabbath and Led Zeppelin in the early ‘70s, and many Britpop bands, including Oasis, in the ‘90s. Whilst it remains to this day a well-loved and popular venue visited by many famous artists, never be mistaken when you walk through these doors…this is no ordinary rock concert!

There are numerous tales of friendly and sometimes malevolent ghosts and spirits who reside in and walk through the building and a high level of ‘paranormal activity’ has already been recorded – independently and in-house. You can be in the old cinema/theatre, the dressing rooms, the cellar, the stage area and even the offices and know someone is always watching you (and we don’t mean via CCTV!). You are never alone at the Tivoli!

Tivoli Staff – past and present (and visiting mediums and ghost hunters) – all have their own individual stories to tell about their own extraordinary and unexplainable experiences in different parts of the building.

But WE want to know what YOU think… Come and join us in our Tivoli Haunting Ghost Hunts… if you’re brave enough???

In the first 5 months of 2015, and recognising what we believe is its unique attraction, the venue and the Team have appeared on Most Haunted, Cuppa TV, Radio Deeside and 60 minutes with!

Tivoli A Haunting We Will Go in Buckley – Blazing Minds

© 2020 The Tivoli Venue
Terms & Conditions
By continuing to browse the site you are agreeing to our use of cookies.