Spike is the founder and front man of The Quireboys – one of the UK’s most enduring rock ‘n’ roll bands. A band that’s been through different chapters and had different line-ups, but Spike is the constant throughout. Song writer, singer and leader of a band with which he has now become synonymous. With lifelong friend Guy Bailey, Spike penned the benchmark Quireboys songs – such as Hey You, I Don’t Love You Any More and 7 O’Clock – tracks which have defined the band musically for decades and, to this day, remain the hallmark songs of any Quireboys show.

Spike has also had a succession of critically acclaimed solo records and treasured collaborations. Music is Spike’s lifeblood. Always has been and always will be. But buy him a few glasses of his favourite red wine and he’ll freely admit family and Newcastle United come a very close second.

St James’s Park, the home of his beloved Newcastle United, is a great place to start when telling Spike’s remarkable story. It was on that hallowed turf that the Geordie lived out his ultimate rock and roll dream as he performed in front of thousands of fans packed inside the stadium as special guests of the Rolling Stones’. Six years after forming the Quireboys with Guy Bailey, the Newcastle-born singer held a raucous home crowd in the palm of his hand and a meteoric rise was complete. Twenty-two years later and Spike was back on the pitch at St James’s Park — talking to 52,000 fans about a heartfelt song he’d penned in loving memory of former United manager Sir Bobby Robson. The emotion was there for all to see. Even those who thought they knew Spike well were forced to think again.

Spike left his native North East for London as a starry-eyed 17-year-old desperate to follow in the footsteps of his rock and roll heroes. Just four years earlier the impressionable teenager caught his first live show — UFO — at Newcastle’s much-missed Mayfair and there was no turning back. The famous venue would become a regular haunt for the wannabe rocker and Spike even went on to write a song about his much-loved second home. Leaving behind everything he knew was far from easy but the lure of London was too great for a musician as ambitious as he was talented. Sure enough, it didn’t take Spike long to become a popular staple of Soho’s thriving mid 80s rock scene as a performer, fixer and party-starting club owner.

Without Bailey there might never have been any Quireboys. In fact, Spike freely admits that the stars aligned when he met one of his oldest friends for the first time in a tiny flat near the Oval. As a songwriting duo the pair proved prolific and set about penning enduring fan favourites 7 O’Clock, Hey You, There She Goes Again and I Don’t Love You Anymore. All four songs became staples of the Quireboys’ chart-busting debut A Bit Of What You Fancy — the album that went all the way to number two on the UK charts and won the band coveted awards and gold and platinum albums all over the world.

For a while Spike and Bailey proved unstoppable as purveyors of good time rock and roll classics. Smitten with their singalong anthems, Sharon Osborne made a bold move to become the Quireboys’ manager and the band joined Whitesnake, Aerosmith, Poison and Thunder on the 1990 Monsters of Rock bill at Castle Donington in front of 72,000 fans. Fast forward to 2015 and an intimate show at Newcastle’s Cluny proved Spike and Bailey had lost none of the magic at the heart of their instinctive partnership. On stage together for the first time in years, under the banner of Spike and Tyla’s Hot Knives, two old friends and former colleagues rolled back the years and revelled in a riotous reunion.

Spike and Bailey helmed a second Quireboys album in 1993 but Bitter Sweet & Twisted arrived at a time when grunge was changing tastes and rewriting rock history. Lead single Tramps & Thieves and the criminally underrated Brother Louie B-side Can’t Get Through served as a timely reminder of the pair’s proven talent but their band’s days were numbered. For now. Towards the end of the year Spike, Bailey and co. put the Quireboys on a haitus. The band never broke up, but after touring and recording non-stop since 1984 it was time for a break.

If Spike liked his time in London then he always loved Los Angeles. LA loved Spike even more. And with the Quireboys on hiatus it seemed only natural to reconnect with his Sunset Strip family and relocate to California. A stint fronting short-lived rockers God’s Hotel kept the creative juices flowing before Spike hooked up with Poison’s C.C. DeVille to record a cover of Hank Williams’ Hey Good Lookin’. Shacked up together at DeVille’s Hollywood mansion, the pair always planned to do more…if only the partying hadn’t got in the way.

During his time in London Spike had struck up another close friendship with fellow Soho scene leader and frontman of the Dogs D’Amour, Tyla. Two kindred spirits and a pair of unapologetically committed party animals, the singers had often talked about joining forces musically. Spike And Tyla’s Hot Knives recorded the fabulously off-trend Flagrantly Yours…and would follow it up 20 years later with the equally eccentric The Sinister Indecisions of Frankie Gray and Jimmy Pallas.

With the Quireboys well and truly on the backburner and nu metal following grunge as the latest threat to rock and roll, Spike finally plucked up the courage to fly solo. Blue Eyed Soul, released in 1998, remains a collector’s item and features standout co-writes with former Go-Go’s bass player Kathy Valentine and God’s Hotel band mate Dominique Davalos. Only Want To Give credits all three songwriters and the title is a telling nod to Spike’s refusal to throw in the towel and his determination to keep writing new music — whatever the cost. 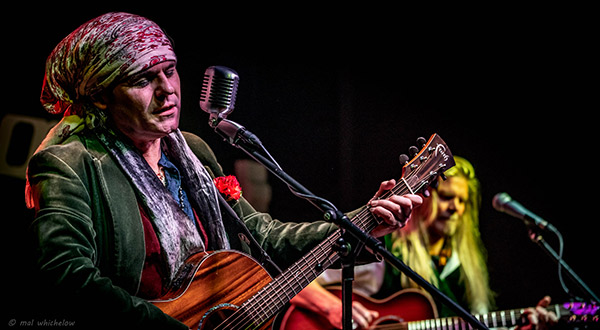 In 2001, Spike reformed his band The Quireboys after securing a deal with Sanctuary records, with Nigel Mogg, Guy Griffin, and bringing in Martin Henderson, Luke Bossendorfer and Kevin Savagar to play in the studio. At that time, Guy Bailey and Chris Johnstone didn’t want to tread the boards but they gave Spike their blessing and they have spiritually remained silent members of the Quireboys to this day – and are often seen at the gigs as they are still very close friends of Spike’s.

From comeback album Well Oiled through to 2019’s Amazing Disgrace, the band enjoyed a run of albums that maintained the band’s momentum. From this run of studio albums, myriad examples of Spike’s songwriting craft and lyrical prowess confirm his status as a national treasure. HalfPenny Dancer showed an acoustic side to Spike’s work, and many have seen parallels between this release and his solo lockdown album of 2021.

During these years, the band toured extensively, Spike’s stage persona and distinctive vocal giving the band a clear and differentiating identity as the Quireboys became a line-up essential for classic rock festivals around the world. Two London anniversary gigs have since become benchmarks – the 10th anniversary of the Homewreckers and Heartbreakers album in 2018 and the following year, the 30th anniversary of the now iconic debut album.

30 years on, the band’s debut album ‘A Bit of What You Fancy’ remains the benchmark Quireboys album, in terms of commercial success and fan favourite songs that define the live sets. Despite Spike’s bigger-than-life stage persona, the timeless appeal of these songs penned by Spike and Guy Bailey were due a second outing. On the eve of the pandemic, plans were made for Spike’s band to re-record a new take on the classic debut album.

Beyond The Quireboys work, Spike has also been the proud custodian of hundreds of unrecorded and undiscovered songs written by Scottish singer songwriter Frankie Miller. On 2005’s solo album, It’s A Treat To Be Alive, he covered a brace of Miller classics including the brilliant Be Good To Yourself. It was the start of a special relationship which continues to stand the test of time. Miller’s wife, Annette, would rock up at Quireboys’ shows with her husband Frankie (who had suffered a brain haemorrhage in 1994) and Spike soon became a close family friend. 100% Pure Frankie Miller was released in 2014 but a carefully crafted collection hewn from the Miller archive was much more than a respectful tribute. Spike breathed new life into the work of one of his favourite artists and remains committed to celebrating the work of a perennially popular musician.

Spike’s determination to keep Miller’s music alive manifested itself in a spectacular show at Sweden Rock in 2015. Under the banner of Spike’s Free House, a star-studded line-up opened the main stage ahead of Slash, Toto, Def Leppard and more. Featuring Free’s Simon Kirke, Thunder’s Luke Morley, Mark Stanway from Magnum and Pip Mailing from the Quireboys, a glorious celebration of Miller standards and Free hits set the mood for a capacity festival crowd. The devastating loss of Andy Fraser, just weeks earlier, added extra poignancy to a memorable occasion after the bassist had previously agreed to join Kirke on stage for the first time in 40 years as a member of the Free House. Six years later and there is talk that an iconic set will finally be released as a special audio-visual package.

MUSIC DURING THE PANDEMIC – AND NEW BEGINNINGS

When lockdown hit in March 2020, Spike’s band The Quireboys were touring the USA. The tour was cut short as the band rushed to get home to their respective families in the UK. As weeks became months and then years, the Quireboys took a long, enforced break as a live act for the length of lockdown – and geography prevented the band from recording new music together. Never one to sit still, during lockdown Spike kept busy with some impromptu solo work. Some live streams evolved into to live sets for Dice FM. Unable to see his mum and play her songs on the acoustic guitar – which she always asked for when he visited – Spike set out to record his mum’s favourite songs to send to her. Done in one take, these songs were a product of the limitations of lockdown, but Spike’s friends suggested he release the songs as a solo album. Spike’s Late Night Song Book album was born.

With the Quireboys still inactive as a live act, Spike booked some low-key acoustic shows to tour his Late Night Song Book album. He was one of the first acts, if not the first act back with live music as lockdown eased in the summer of 2021. It was the perfect setting to encourage people back to grassroots venues – low key, socially-distanced shows, evenings of music and storytelling.

Whilst the Quireboys band regrouped to play Steelhouse Festival that summer, the dynamic between the band had changed during two years of lockdown. Around the world, people were re-emerging from the pandemic era differently to how they went into it. By Spring 2022, the Quireboys line-up of Spike, Griffin, Guerin and Weir was over.

As the world rebuilds and recovers from the COVID era, a new chapter in The Quireboys story will begin – something which is, after all, is a story of chapters and evolving line-ups. The one constant since day one is Spike. With his trademark bandana, song writing prowess and bigger-than-life stage persona, Spike will be back with a new line up to take The Quireboys into a new chapter of its story in 2022. There will also be more from his solo Late Night Songbook series and more collaborations with his great friends. The story continues…

FM – Friday 12th August 2022
Soundcheck Sessions (educational) – Saturday 5th May 2022
© 2022 The Tivoli Venue
Terms & Conditions
By continuing to browse the site you are agreeing to our use of cookies.